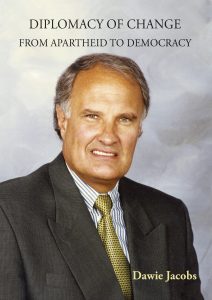 David (Dawie) Jacobs’ journey began with a carefree childhood in the rural north-eastern Free State and took him to foreign capitals around the world − from close involvement with issues of justice, race, religion and politics in his own country to high-level discussions on these matters with foreign presidents.

After a career in the Department of Justice, Dawie served as South African diplomat under apartheid and democracy. He held senior positions under both, among others as ambassador to various countries. A golden thread running through his journey is his passion for building bridges between individuals, communities and nations.

Dawie is well known for his political commentary in various South African news­papers over the years, as well as for his sports diplomacy – he has arranged a number of rugby tours to and from South Africa.

How did it come about that a privileged child from rural South Africa found his way to the heart of Soweto, supporting a leading judge to delve into the core of South Africa’s apartheid woes? He is then called to the inner circle of National Party cabinet ministers, coming face to face with arrogance and indifference. When this environment becomes too claustrophobic, he steps into the corridors of international diplomacy and rubs shoulders with democrats and demagogues.

The values taught in the north-eastern Free State sustained him throughout his public career and now propels him into the future where he continues to acknowledge the injustices of the past, expose the misdeeds of the present, and build bridges across old divides.

Diplomacy of Change – From Apartheid to Democracy makes our history come alive and reveals the human being who lives this extraordinary life.